On 7 April 2022 the Local Government Commission released it's determination:

Under section 19R of the Local Electoral Act 2001, the Commission determines that for the general election of the Gisborne District Council to be held on 8 October 2022, the following representation arrangements will apply:

a. Gisborne District, as delineated on Plan LG-028-2022-W-1 deposited with the Local Government Commission, will be divided into two wards.

In 2020 Council voted in favour of including Māori wards, this triggered the requirement for a representation review.

Council resolved on 4 November 2021 to amend its initial proposal to the following final proposal of representation arrangements for at least the 2022 local elections:

The reason the total number of councillors is proposed to remain at 13 is to give effect to the workload of a unitary council and to ensure effective representation of Gisborne district residents and ratepayers, ensuring accessibility to a large and diverse area made up of populated towns and sparsely populated areas. 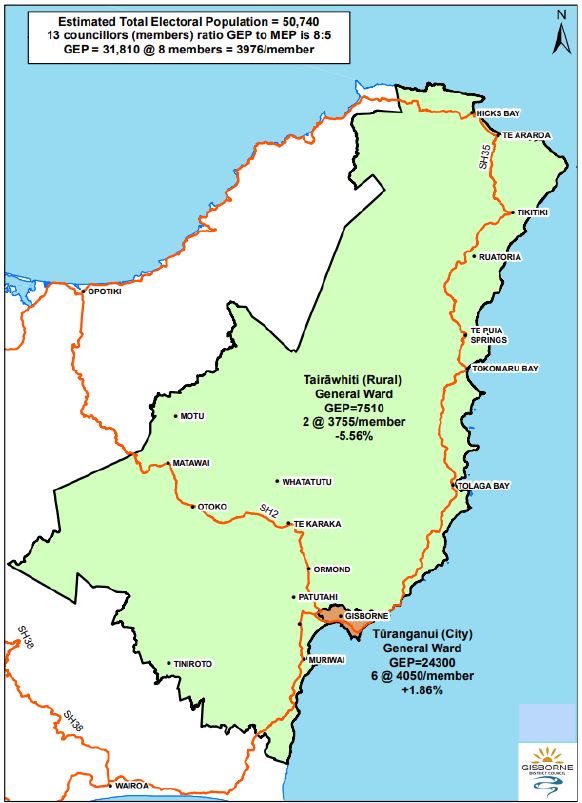 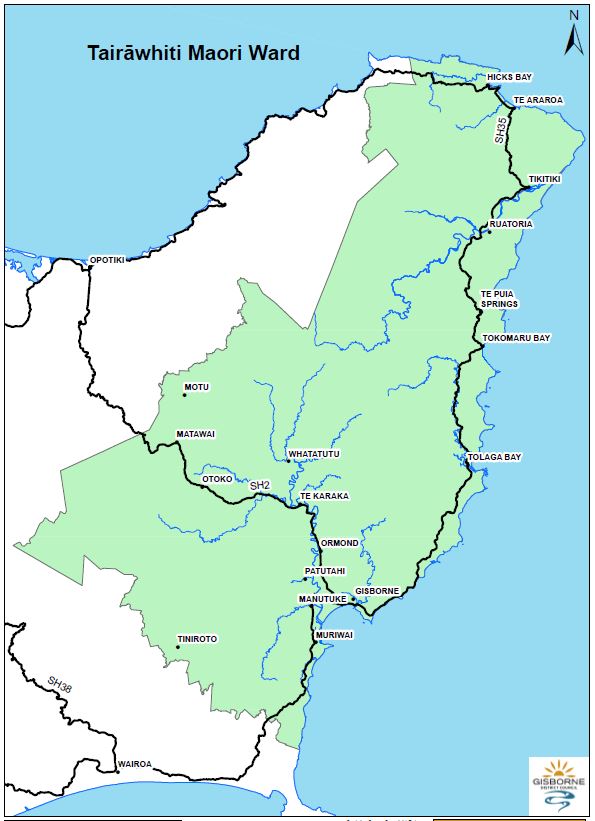 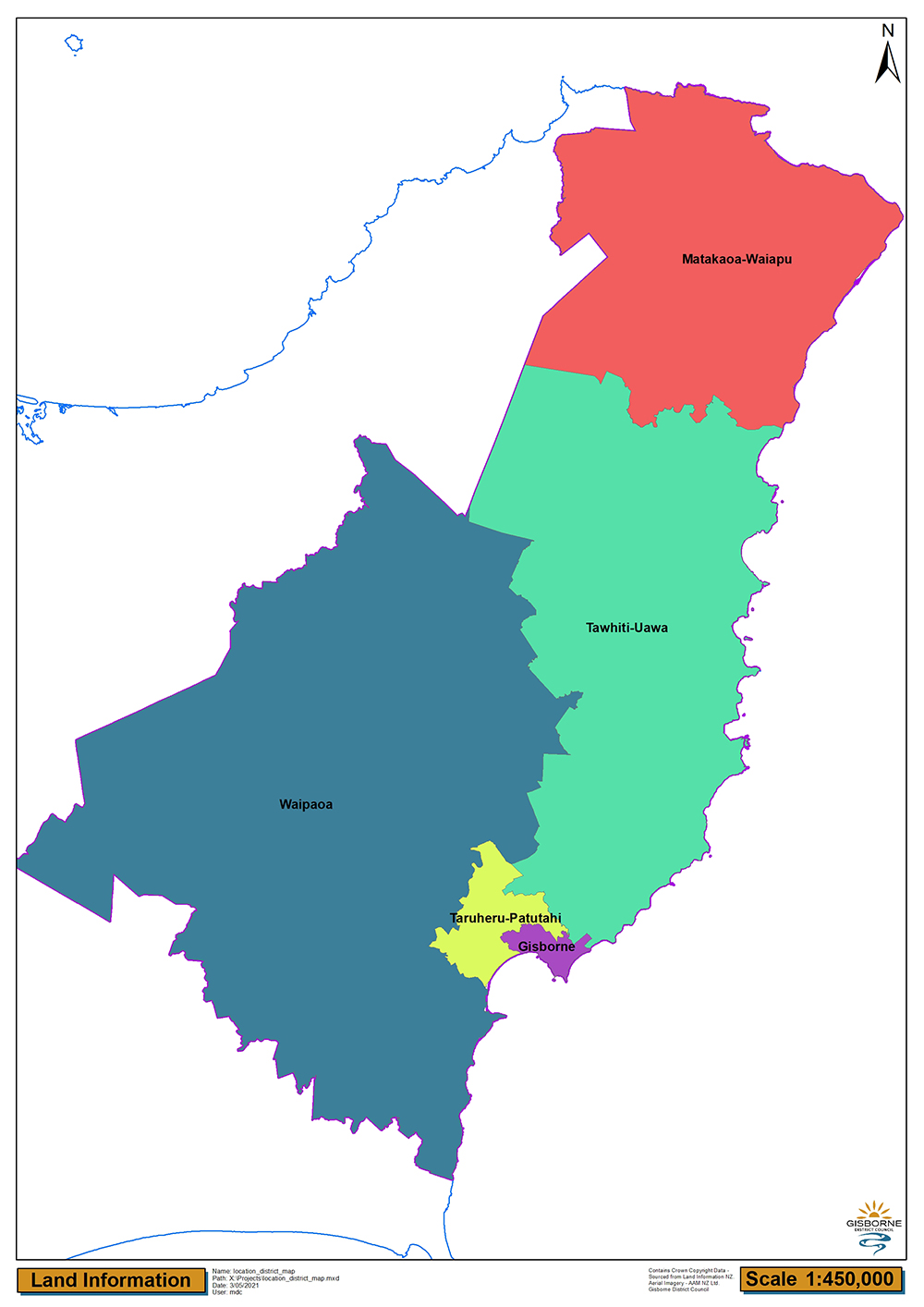 About the representation review process

Information about the review, structure of council, number of councillors and their representation.

We are reviewing how Gisborne District Council represents our communities. All councils are required to review their representation every 6 years.

In November 2020, Council voted to include Māori wards and that decision brought forward the 6-yearly review of representation for the local body elections in 2022 and 2025.

The representation review looks at the total number of councillors there should be for a region and the way they're elected. The position of mayor is not part of the review. The review involves deciding:

Council is required to consider 3 key factors to ensure effective representation of communities of interest. This is required for both the Māori and General electoral populations:

The last review was in 2019 and resulted in no changes to the representation arrangements.

It was the 2013 review that produced the structure we see today. It was determined by the Local Government Commission based on a communities of interest analysis by Council staff.

Can we keep our current representation arrangements?

In 2019 the Local Government Commission told us that we needed to keep the 5 ward system in place for the 2019 local body elections. These 5 wards are:

With the introduction of Māori wards our current set up is no longer an option.

As such, Council and the whole community need to take a fresh look at our representation arrangement.

The people elected in your ward are your voice and advocate at the Council table.

This review looks at Council’s membership to ensure we're providing the right representation for our people and their communities.

Each elected member should represent a similar number of people. If Council decides to divide the district into wards, in legislation each ward councillor must represent the same number of people, plus or minus 10%.

In deciding effective representation, questions in relation to accessibility to elected members, size and configuration of an area also need to be considered, for example:

What does fair representation mean?

This determines where boundaries should be. It means that where there's wards members should be equally spread among the population:

The minimum number of councillors the Gisborne District Council can have is 5 and the maximum is 29.

Some examples of how the total number of councillors affects the number of Māori ward and General ward councillors.

On 23 November 2020, Council established Māori wards for the next 2 local body elections (2022 and 2025), alongside General wards, under the Local Electoral Act. Māori wards are the local government equivalent of the Māori parliamentary electorates.

A candidate standing for a Māori ward does not need to be enrolled on the Māori electoral roll to stand.

This is also the same for the General ward, where a candidate does not need to be enrolled on the General electoral roll to stand in that ward.

Candidates for both the General and Māori wards must be nominated by 2 electors enrolled in the ward they are seeking for both Māori and General wards.

As part of the review, we must identify the region’s communities of interest. Local Government Commission guidelines recognise a community of interest according to 3 criteria:

There can be physical or topographical features that define a community of interest, and similar communities can be grouped.

These groupings can be by ethnicity or the activities that take place in a community that bring people together. Communities do change over time.

As part of the review, Council must consider whether community boards are necessary to provide effective representation for local communities within the district.

The role of a community board is to:

Community boards have their own status in legislation and are not a committee of Council. They're not local authorities and therefore cannot set rates, raise funds, enter into contracts, deal in property, pass bylaws or appoint staff.

Matters for the Council to consider in deciding whether one or more community boards should be established in the district include:

A representation review looks at the total number of councillors there should be for a region and the way they're elected.

This involves deciding whether councillors are elected from wards or “at large” across the whole region or by a mix of both wards and at large.

A review also covers whether there should be community boards and if so the number of boards, their names and boundaries, and the number of members for each board.

No, Council voted in 2020 to move to a Single Transferrable Vote (STV) electoral system for the 2022 and 2025 local elections.

Council released a public notice after this meeting advising electors that they had the right to request a poll to overturn this Council decision.

A valid demand for a poll was not received by the deadline of 21 February 2021, so the STV electoral system will be used for the 2022 elections.

On 13 August 2020, Council resolved to use Single Transferrable Voting (STV) as the electoral system for the 2022 and 2025 elections, replacing the current First-past-the-post (FPP) system.

STV is a ‘preferential’ voting system. This means you rank as few or as many candidates as you wish according to your preferences. Your vote is then transferred, in whole or in part, from your first preference to your second preference to your third preference and so on, depending on whether that candidate has enough votes to be elected.

STV can be seen as a fairer system as, depending on the number of candidates you rank, you will contribute to the election of at least one candidate and your vote will not be ‘wasted’.