Possums (Trichosurus vulpecula) were introduced to New Zealand from Australia in 1837 to establish a fur industry.

Possums are established over more than 90% of New Zealand and are a very serious problem.  They're now considered a major environmental pest.

Land owners in the Gisborne district are encouraged to destroy possums on their land.

Why are possums pests?

They destroy poplars and willows planted to control hill-country and river bank erosion.

Possums damage orchards, horticultural crops, pasture, commercial forests, shelterbelts and are a nuisance around gardens. They carry and can spread bovine tuberculosis (Tb), a disease which affects cattle and deer.

Check out what our staff are doing

Animal biosecurity officers Travis Dalton and Scott Sharp take us through their pest control operations in some of Gisborne's native environments.

Responsibility for the control of possums

Possums are classified as 'Sustained Pests' in the Gisborne district. Land occupiers are responsible for the destruction of possums.

* in erosion protection plantings of Poplars and Willows that have been established within the last 5 years.
* in a buffer area on the border of Hawke's Bay.
* as part of 'site led' multi-species pest control programmes.
* to support landowner led initiative known as 'community possum control areas'.

Council will provide advice, support and assist planning where possible, to community groups and individual land occupiers undertaking their own control work.

Poisoning and trapping are the best possum control methods.

Make your property less attractive to possums by reducing piles of logs, dead trees and stumps.  Block-off entry points into sheds, roofs and other buildings. 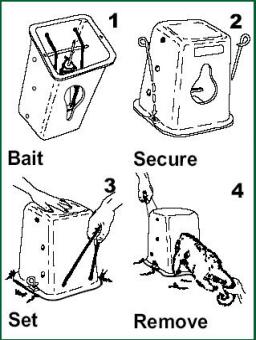 Trapping is effective possum control in small to moderate sized areas such as lifestyle blocks.  The Timms trap and live capture trap are best.

The Timms trap is a kill trap, simple and safe to use.  Bait the trap with fruit like apple, orange or kiwifruit.  Sprinkle the fruit with cinnamon, this will make it more attractive to the possum and less so to birds and cats.  Don't use meat or fish as these will attract cats.  Place traps in areas where there are possum signs such as feeding trees or beside possum runs.  Traps must be checked every 24 hours after setting, to avoid any unnecessary suffering or pain to any animal caught.

A live capture trap will catch the possum when it reaches for bait attached to a trigger arm.  The main advantage of these traps is if you catch any other animal it can be released unharmed.

Trapped possums must be killed humanely.  To kill a trapped possum, grab it by the tail - with a heavy instrument or hammer, hit it hard between and slightly forward of the ears.  This will stun the possum, but you'll need to hit it again in the same place to kill it.

Poison in a bait station is an effective method to control possums over large areas.

Bait stations can be attached to a post or a tree.  Make sure they're out of the reach or children and pets.  Place them about 30cm from the ground or just above the fork in a tree, the possum will sit in the fork to feed from the station.

You can buy bait stations and possum baits from any farm supply store.

For cyanide or obtaining a controlled substance licence you need to contact Environmental Risk Management Authority NZ (ERMA) check their website  or call the compliance phone line on 0800 376 234.

Shooting can lower possum numbers.  Any person shooting must hold a firearms licence, or be under the supervision of a person who both holds a licence and is over 20-years of age.

For night shooting, make sure you know your shooting area well.  Positively identify your target before shooting.  The 'eye-shine' of possums and rabbits is red-pink.  Repeated night shooting in the same area may become less effective as possums can become light and gun shy.