This site uses cookies to analyse traffic, remember your preferences, and optimise your experience.

Information on Argentine and Darwin's ants 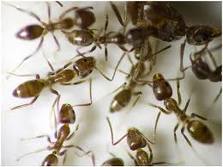 The best way to tell Argentine ants from other ants is by their colour and trails.

Argentine ants are small (2-3 mm long) and honey-brown in colour, while most other common household ants in New Zealand are black.

If crushed, they give off a subtle oily scent, very different to the sharp smell of formic acid released by other ant species.

Foraging workers move steadily in trails several ants wide that tend to go over, rather than around objects in their path.

The ants aren't poisonous, they can't sting but some people react to their bite.

Some parts of Gisborne have found they have the Darwin's ant.  This is a small brown ant from Australia.

If you suspect you have Argentine ants

Xstinguish ant bait is the recommended bait for Argentine and Darwin ants.

Contact a pest control company or purchase the ant bait from a hardware store or online.

You can make a homemade ant poison or purchase a commercial product "Neverwrong™".  But note that neither the homemade bait or Neverwrong™ will do the thorough job of Xstinguish™ - they're recommended as useful follow-ups only.

This homemade mixture can be used in a maintenance programme after the main treatment with Xstinguish™, to make sure ants are kept at low levels.  It needs to be put in bait stations, and refilled every 2-3 days for 2 weeks or longer.

Boric is a slow-acting stomach poison to the ant, and they do take some back to the queens.

Put the mixture in a suitable dispenser such as an old detergent bottle (well labelled "Ant Poison").

Lay the poison in bait stations such as plastic milk bottle lids, placed the lids near the ant trails.

Bait stations should be well washed every now and then, as the smell of dead ants will deter other ants from sampling the mixture.

How you can help stop the spread of ants

It's important to stop the spread of Argentine ants. You can help to make sure they are not moved around, check:

If it's confirmed you have Argentine ants on your property, the best course of action is to work with neighbours.

If the bait is laid simultaneously with neighbouring properties it will give a wider kill-zone.  This will reduce the chances of being re-invaded within the year.

Unlike most other ants, they climb trees to get to food sources.
Argentine ant colonies cooperate with each other, and can combine over winter into super-colonies. They reach enormous numbers, which means they have a huge appetite.
It also makes them more aggressive towards other insect populations through their sheer numbers.