As part of the Waingake Restoration Project, Council staff and ecologists from Wildlands Consultants have established 8 permanent vegetation monitoring plots within the waterworks bush.

Owned by Council, Waingake Bush comprises a 1100 hectare podocarp-tawa-beech forest that is the catchment area for the city water supply.

Waingake Bush has significant biodiversity value and is has been subject to a QEII National Trust Conservation Covenant since 1987.  Studies show the bush has been severely impacted by a number of pest animals, and without the introduction of a pest control program, the future of the forest’s ecosystem will be severely compromised.

In 2018, Council agreed to a five-year animal control and monitoring programme. Using a combination of trapping and bait stations, it aims to control and reduce target animal pest numbers in the reserve.

Work is well underway to deliver on this program, with a perimeter network of traps and bait stations in place around the edge of the reserve, and an internal bait laying operation completed in 2020. The work has been further supported by the wider Waingake area goat control operations in 2020-2021.

In order to assess what impact the pest control operations are having on the health of the forest, Council was advised to undertake permanent vegetation plot monitoring. The purpose of the plot monitoring is to get a snapshot of the current state of the forest in terms of what vegetation species are present, their density and life-stage (ie seedling, sapling or mature tree). This baseline data will help determine how successful the pest control operations are by measuring changes in vegetation over time.

Coordinates for the plots were first generated at random on GIS mapping.

Each plot measures 20m x 20m and will be re-surveyed every 5 years. Field staff then used hand-held GPS devices to locate the plot coordinates on the ground and set up the plots according to standard forest monitoring methods for permanent plot monitoring.

Features of each plot such as altitude, aspect, slope angle and rock-type were recorded. The plot perimeter and inner sub-plots were marked out with tape, then the team went to work measuring, tagging and identifying all trees and shrubs with a stem diameter over 2.5cm dbh (diameter at breast height).

Saplings with a stem dbh of less than 2.5cm, but taller than 1.35m in height were also recorded, along with any smaller seedlings that were found in the understory sub-plots (see figure 2). Each plot took a team of 4-6 people a day to complete. The resulting data has been entered into the National Vegetation Survey Databank, administered by Landcare Research.

Long-term it's hoped that the plot surveys will show a gradual improvement in regenerating understory and sub-canopy plant species, which are essential to the continued life-cycle of the forest.

There's currently a good variety of mature canopy trees and a smaller range of saplings and emerging seedlings. What was noted during the surveys was that many emerging seedlings are clearly not managing to grow through to the sapling stage due to heavy herbivore pressure.

Evidence of pig rooting and possum, goat or deer browse was seen across most of the plots. Of particular interest in future surveys will be how the population of highly palatable species, such as karamu and ribbonwood, (enjoyed by both possums and goats) respond to the reduction in pest numbers in the area. Also, whether we see an increase the overall density of saplings within the forest, particularly those at vulnerable “browse height” (around 1m) where pest pressure is often highest. 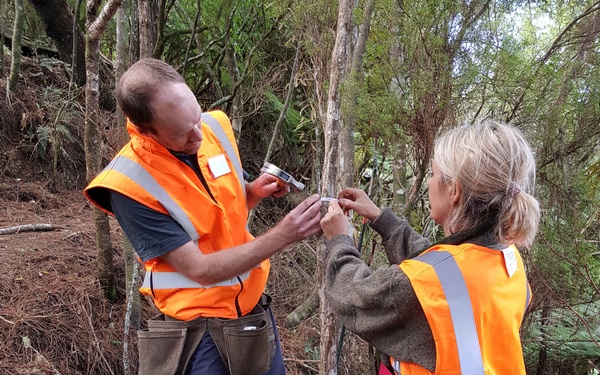 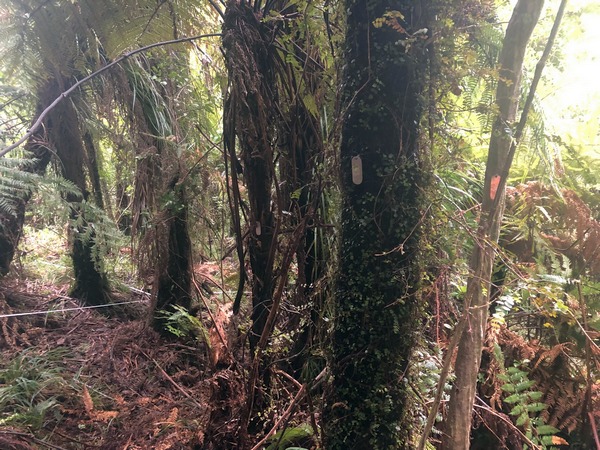