Groundwater is water that comes from the ground.  It's water that's travelled through the soil to underground 'aquifers'.  Aquifers are porous geological formations, often gravel and sand which act like a sponge, soaking up and storing water.

Groundwater is the main source of water in the middle of the Poverty Bay Flats away from the Waipaoa River.  The aquifers supplying groundwater were formed from gravel deposits left behind by the Waipaoa River over many thousands of years.

Groundwater in the Gisborne region is used for the irrigation of crops, water for stock and to provide vital backup drinking water when other sources are unavailable. Groundwater is particularly important as the rivers and streams of the region all typically have low flows in summer.

Almost all the known groundwater aquifers in the region are located on the Poverty Bay Flats.  There are over 1,400 bores on the flats drawing water for irrigation and domestic use.

No results were found

A gravel aquifer that can be encountered at depths of 45-80m depending on location and ranges in thickness from 5-15m.

A narrow gravel aquifer that can be encountered at depths of 90-140 metres in the subject area.

A shallow sand aquifer that can be encountered just below the topsoil and can be up to 20 metres thick.

Gravels laid down within the meandering river channel cut into fluvial, swamp, lagoon and estuarine sediments.

Shallow fluvial deposits are also found at depths of 0-20 metres at a number of locations around the Flats and can be up to 10 metres thick.

Gravels aquifer that can be encountered at depths of 10-30m depending on location.

Permit requirements to install a bore

You need to apply for a bore permit to install any type of water bore.  This is to ensure we have a record of all bore locations.

A bore permit does not mean that a water permit will be issued to take water from the bore.

Up to 10 cubic metres of water can be taken for domestic and stock water needs from an underground bore.

For more than 10 cubic metres - a water permit is required.

There's no fee for domestic or stock monitoring bores. 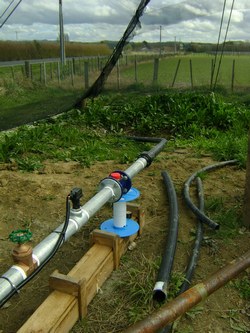 A bore or well can be drilled into an aquifer and secured with a casing pipe which brings the water to the surface.

The cost of installing a groundwater bore depends on the depth and how the water is to be pumped.  Pump testing of the bores is sometimes required to find out if it's having a negative effect on neighbouring properties.  A pump test also provides council with valuable information that can determine the storage capacity and how quickly the aquifer can recover from pumping for an individual bore.

For bores which are to be used all summer, a submersible pump is recommended, as water levels can drop below the lift capacity of most surface pumps.  A screen should be fitted at the bottom to avoid the pipe or pump from clogging.

The groundwater travels through the soil until it reaches a depth where the sediments are filled with water - the 'saturated zone'.  This process 'recharges' the groundwater supply.  The top of the saturated zone is called the water table in an unconfined aquifer and may be very close to the ground surface or many metres down.

Groundwater can also be recharged when water from rivers or streams travels down through the riverbed to replenish the aquifer below.

In Gisborne, water entering through the groundwater system beneath the Poverty Bay Flats flow towards the coast through the sediments.  Although - with the exception of the Te Hapara sand aquifer - the aquifers have no direct connection with the sea.

Groundwater is not protected from contaminants. Soil can act as a filter, although it's not able to filter out all impurities.

Contamination of groundwater can happen gradually and go unnoticed for some time. Most contaminants come from the ground surface, shallow watertable aquifers with thin soil cover are easily contaminated.

Contamination of groundwater can come from:

Because the flow of groundwater is slow with little turbulence, contaminants are not easily diluted or dispersed.  Pollution can therefore stay a long time in groundwater and can be very difficult or impossible to clean up.

Naturally occurring contaminants include minerals which dissolve out of the surrounding rock such as iron, calcium, magnesium and manganese.  These are generally only a nuisance, at worst - clogging irrigation nozzles, rather than being a risk to human health or the environment.