What is the Makauri aquifer?

The Makauri aquifer is the largest aquifer underneath the Poverty Bay Flats extending from Kaiteratahi down to Makaraka. It spans both sides of the Waipaoa River but most of the aquifer is on the eastern side.

The aquifer slopes from Kaiteratahi where it is relatively shallow (about 20m deep) down to the toe of the aquifer by Makaraka where it is about 80m deep.

The aquifer is not an “underground lake” – instead it's an area of gravel and sand under the flats which is saturated with water.

The Makauri aquifer sits below other aquifers on the Poverty Bay Flats. Its natural way of recharging is for water to percolate from the river and higher aquifers down through the gravel into it. This happens slowly over decades, and most of the recharge currently occurs around the Kaiteratahi area 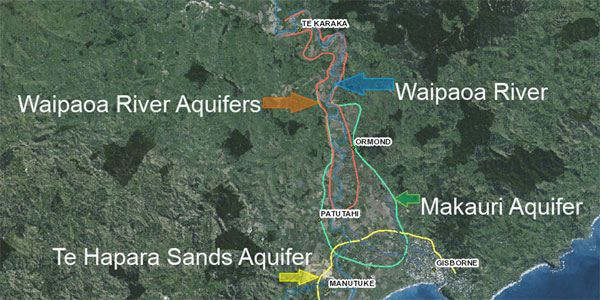 In the 1980s Poverty Bay had a significant boom in horticulture and water takes for irrigation of crops has remained at a constant level since then.

The aquifer has very little natural recharge from rainwater and river water, because of changes to the land like flood control, vegetation clearance, rainfall and climate changes as well as water taken for use by farmers and growers.

It's a semi-confined aquifer and once full it can't take any more water. The more that's pumped out, the greater the recharge as the aquifer refills naturally.
The amount of water recharging the aquifer is less than the amount of water abstracted so the overall effect is that the aquifer water level declines by up to 0.1m per year.

A Managed Aquifer Recharge (MAR) is one of the proposed solutions to managing water levels in the aquifer.

MAR is a tool that has been used around the world to increase water levels in aquifers, there are also different methods of Managed Aquifer Recharge.

We’re proposing to trial an injection method which ‘injects’ water from another source into the aquifer through a bore.

The trial is see whether an injection MAR will work, without any adverse effects.

Council will apply for 4 resources consents to take water from another source and inject it into the aquifer. The consent applications will be going through the Bay of Plenty Regional Council to make sure the consenting process is transparent and independent.

We already have. We renewed the consents to take water from the aquifer last year and cut 75% of the allocation from existing water users.  We are not granting any new users consent to take water.  At each 5 yearly review of the consents a further 10% cut in water use is required until the aquifer is stabilised.

International scientists and engineers have assessed the feasibility of a MAR in the Makauri aquifer.

The Makauri aquifer is semi confined. This means it doesn't ‘leak’ so much into the sea or into other aquifers. This is due to its near impermeable soil layers of silts and clays that have been deposited by the river over time. As long as the water quality's not compromised it may be able to be used to store water without any evaporation or leakage losses.

The trial will tell us if it’s possible to increase the amount of water in the aquifer with minimal impact on the water quality and environment.

Successful MAR schemes have been carried out around the world for many decades.

About 1200 case studies from over 50 countries around the world were analysed for the first global inventory of MAR schemes (see map) In South Australia, MAR scheme investigation and implementation started in the early 1990s. There are currently about 10 schemes operating. MAR has been used in the United States since the 1960s particularly  in California and is now used in dozens of states.

Unregulated schemes in the Netherlands date back as far as 1879, but modern version of MAR schemes have been running since the mid 1900s.

In the research leading up to the Phase 1 trial a number of sources of water were considered.

It’s also in a good location between the river supply and the largest water takes in the aquifer. See the MAR reports for more information.

Yes, the intake site is some 30km downstream from the Te Karaka wastewater discharge, allowing for a large dilution effect.

Both the CIA and the Mauri Compass have noted the negative cultural implications of this discharge. As part of the CIA we are monitoring a suite of emerging contaminants that could come from there and other activities in the catchment area.

During the first trial it was decided to chlorinate the water before it was pumped into the water.

The water in the aquifer is very anoxic (very low oxygen content) so any organism dies very quickly in this low oxygen environment. Therefore the chlorination was discontinued after 4 weeks as the concern about disinfectant bi-products, coupled with the fact that we know organisms die off in the anoxic aquifer, means that we will not chlorinate during the phase 2 trial.

During the first trial it was decided to chlorinate the water before it was pumped into the water.

The water in the aquifer is very anoxic (very low oxygen content) so any organism dies very quickly in this low oxygen environment. Therefore the chlorination was discontinued after 4 weeks as the concern about disinfectant bi-products, coupled with the fact that we know organisms die off in the anoxic aquifer, means that we will not chlorinate during the Phase 2 Trial.

Ground water eco systems can be comprised of a range of species including bacteria, fungi, protozoa and macroinvertebrates known as stygofauna.

Stygofauna are highly adapted to living in groundwater systems and play an important role in nutrient cycling and serve as indicators of groundwater health.

In anaerobic systems (such as the Makauri aquifer) high concentrations of ammonia, iron hydrogen sulphide and methane can be toxic to many of these species.

While over 500 species of stygofauna have been identified in NZ ground water systems these communities are not well understood. Research also suggests that they're more abundant in shallow aquifers, and abundance reduces with depth, and may be non-existent in deep anoxic aquifers like the Makauri aquifer.

A one-off sampling of one of the monitoring bores associated with MAR in August 2017 found little evidence of a stygofauna community.

Changes in water quality, as a result of injecting anaerobic river water is likely to result in a habitat that is more suitable to support a stygofauna community. Increased stygofauna numbers could assist with controlling biofilm biomass, although the degree to which this occurs is uncertain.

Additionally results from the phase 1 trial showed that the oxygen was quickly depleted.

Part of the trial assessment is to see if there are environmental, community or cultural benefits from MAR.

Types of things we are looking at include whether:

As part of the resource consent and ECT funding conditions, Council is engaging with Rongowhakaata Iwi Trust around the development of a cultural impact assessment.

Te Aitanga a Mahaki have also completed a Mauri Compass assessment of the project, which establishes a base-line for monitoring the improvements phase 2 will bring.

There have been no observed negative effects on the Mauri of the aquifer at the end of the phase 1 trial.

Throughout New Zealand there are many different ways of assessing cultural impacts.

There's no ‘one Māori view’ or a universal Māori view: it's important to acknowledge this and that there are different views between iwi, hapū, Māori land owners and also within those groups.

If we see any immediate impacts from water pumped into the aquifer we can reverse the pump and take the water back out of the bore.

If the chemical reactions to the oxygen can be restricted to a small ‘bubble’ within the aquifer it will be able to be managed.

The smaller the ‘bubble‘ the better and nature will be able to handle the changes over a short period of time.

The bacteria in the water will be more active but then should de-oxygenate quickly. Monitoring will let us know how well we've restricted the bubble of water. Ongoing water quality testing will be continued to ensure that the natural state is retained.

The other measure of success is the hydraulic response. The water level will rise some distance away even though the injected water will not move far from the injection location. A small chemical effect and a large hydraulic effect is the aim.

We’ll assess the results of the trial and consider if we should proceed with a business plan and economic assessment for a full aquifer recharge programme.

Water is being taken directly from the Waipaoa River so this will not affect the city water.

The Waipaoa water supply is typically used during mid-summer while MAR will likely run during autumn and winter.

Consent requirements allow us to only take water from the river when flow rates are 4000l/s or greater and not less than 4100l/s for 5 consecutive days.

There are 35 growers with resource consents to take water from the aquifer.

But there's also a greater number of unknown landowners who are taking permitted (not needing consent) water for domestic use, stock water, spraying and other small uses.

Economic work undertaken identifies that $20million annually is contributed to the Gisborne economy from the crops irrigated from the aquifer.

Work undertaken by NIWA indicates that over time we're likely to see more frequent extreme events, floods and droughts, in the catchment.

In terms of rainfall and therefore river flows, we're likely to see less rain and lower flows in spring.

The time for recharge of our aquifers is winter, so this is not likely to be badly affected – but it will mean more demand for water during spring as this is a critical time for crops.

Once all the data has been collected and analysed a decision will be made whether to progress with a permanent MAR scheme.

The governance structure is likely to see Council in a regulatory role.

Council has only committed to the trial to see if Managed Aquifer Recharge will work.

To actually stabilise and recharge the aquifer, multiple sites and injection bores would be needed.

Currently about 1 million cubic metres of water is taken out of the aquifer each year. Modelling shows that 360,000m3 per year is required to go back in to stabilise the aquifer - that could be up to 5 more injections bores. Even more water would need to go in on top of that to enable any expansion of irrigation.

If the trial shows that MAR is a good option for the Makauri aquifer, then an economic case would need to be made to go ahead with a full recharge.
We’re currently looking at how other irrigation schemes work in the rest of New Zealand